A followup on Ubuntu MATE!

This site has been much neglected! It’s been about four years since I’ve posted anything here and there’s been a lot of water under the bridge. But, as a followup on my last post, I can report that after four years, I’m still using Ubuntu MATE as my daily driver GNU/Linux distro.

I’m still using the same i5 laptop as my main machine, but, over the last few years I’ve bumped up the RAM to 8 gigabytes and I’ve swapped out the hard drive for a 500 GB drive.

What can I say, it just works!

I’ve got access to the extensive Ubuntu software repositories, and if something is missing or not up-to-date I can just add a PPA. And, now there are the new kids on the block, “Snap” packages and “Flatpaks“.

Many of you who are currently running Windows 7 will hit the “end of life” wall in January, 2020. After that, you’ll have to switch to Windows 10 if you want to stay in the Microsoft world. But, you might not be running hardware that will handle it.

Certainly I wouldn’t want to touch Windows 10 with anything less than 8 GB RAM and 16 GB would be better. I honestly don’t care what the folks at Microsoft tell you.

Lucky for me I’ve only had to deal with Windows 10 on other people’s machines and quite frankly, it’s a mess of ads and other crapware constantly popping up at you. When you first set it up you’ll spend at least an hour shutting crap down and turning stuff off.

So, if you’ve got some kind of early vintage 64 bit computer with two to four gigabytes of RAM, I’d seriously take a look at Ubuntu MATE. It could mean the difference between buying a newer computer and keeping you’re old computer running!

Lubuntu has been my “go to” GNU/Linux distro of late for computers running on somewhat older hardware.    I generally like lighter weight desktop user interfaces and prefer to stay away from Gnome, KDE, Unity and the new Cinammon desktop.  For the last few years I’ve been mostly using XFCE or LXDE desktops.

The type of computer I’ve been installing Lubuntu on for friends and family members has typically been either a later Pentium IV or a Core 2 Duo vintage machine with one or two gigabytes of RAM.   These are usually computers that used to run Windows XP or Microsoft’s horrible excuse for an operating system…Windows Vista.

The “MATE” desktop was forked some years ago from the old Gnome 2.x desktop by the Linux Mint project, but recently a community based version of Ubuntu was released that also makes use of MATE.

I’d heard some great reviews of Ubuntu MATE, particularly from the “Linux Action Show” (one of my favourite Linux related podcasts) and decided to give it a shot on a recently purchased used off-lease HP ProBook.   This laptop is about four years old and has an Intel i5 processor with four gigabytes of RAM.  It cost me $299 from a neighbourhood used computer re-seller.   (That’s about US$230, 150 UK pounds or about 210 euros).

As I usually do, I downloaded the ISO image file and then created a bootable USB stick using the Unetbootin tool.    I then went into the BIOS settings and changed the settings so that the computer would boot from the stick instead of the hard drive.

In a couple of minutes, I was up and running in “live” mode, running Ubuntu MATE from the USB stick instead of the hard drive.     Everything worked!   Video, wifi, audio etc.   Lucky for me there was no oddball hardware in this laptop that required proprietary device drivers.

In fact, even when running from the USB stick the machine was running faster than a fresh Windows 7 install.

So, time to blow Windows 7 away!    I just clicked the install icon on the desktop, accepted the default hard drive partitioning, set the keyboard to U.S., entered the time zone and created a user name and password.    With a few mouse clicks it was Goodbye Windows 7 and Hello Ubuntu MATE 14.04.

Twenty minutes and one reboot later I was up and running!   Firefox and Libre Office along with a number of other useful programmes were already installed.   I immediately ran some updates (about 250 MB worth) which perhaps took another half hour on my not exactly speedy DSL internet connection.

So with Synaptic installed I just checked off all of the extra software I wanted to grab, hit “apply” and then let Synaptic pound away grabbing about 600 MB of software applications that I wanted.

Then, after about 45 minutes I was done!

There are a few programmes that aren’t the absolutely latest version, and no doubt I’ll be adding on some PPA‘s (Personal Package Archives) over the next week or so, but for now I’m quite happy.

Ubuntu MATE is quick and snappy on this particular machine and I really don’t have any complaints.   It just works!     I have no problem recommending Ubuntu MATE to someone who is new to GNU/Linux, providing the hardware is not too old.   For P4’s and Core 2 Duo’s with only one or two gigs of RAM, I’d stick with Lubuntu. 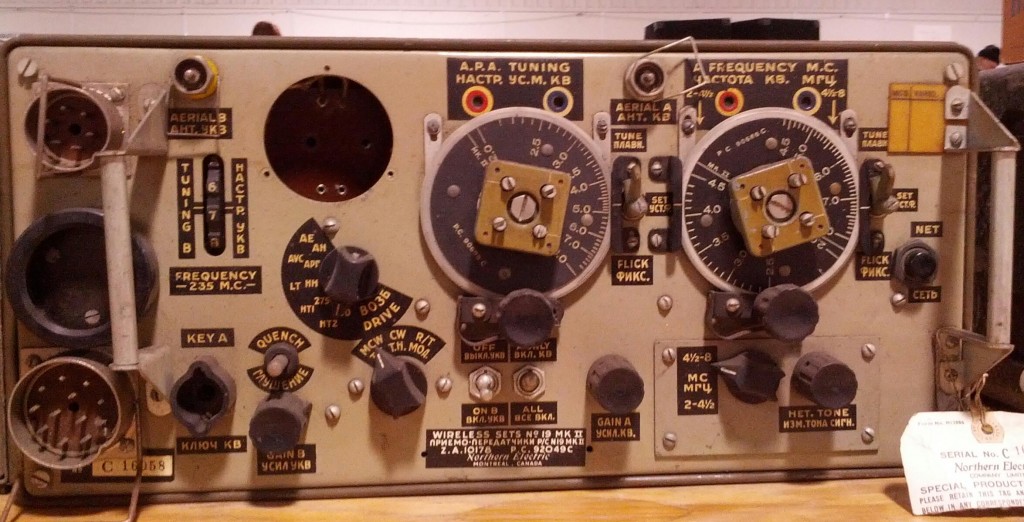 I came across this “Number 19 Set” up for sale at “Hamex“, the annual amateur radio fleamarket sponsored by the Mississauga and Peel Amateur Radio clubs held every March at the Brampton Fairgrounds.

This particular radio has an interesting history.   The original version of the 19 Set was used by the British Army during the Second World War.   The version seen in this photo was produced here in Canada by Northern Electric sometime after 1942.

You’ll note that the radio is labeled in both English and Russian.   That’s because these radios were also supplied to the Soviet Red Army for use on the Eastern Front.

I’ve never met Norman Rashleigh VE3LC, a long time Ottawa area ham radio operator.   But I have to give him a big public thank you and I think it’s overdue!

A couple of years ago the kitchen in our early 1920’s vintage house underwent a major renovation.   That meant changes to the electrical layout to handle all the kitchen gizmos in a 21st century Canadian kitchen,  along with a switch to more energy efficient lighting.

For anyone with an interest in radio communications, energy efficient lighting is often a bit of a two edged sword.   You certainly do save money on your electricity bill, but it often comes at the cost of massive radio frequency spectrum pollution.

It doesn’t need to be this way of course, but it’s the result of the deregulation of industy over the last few decades and electronics manufacturers being allowed to “police themselves” on RF spectrum pollution issues and near zero enforcement by government agencies around the world.

Throw into the mix, the shift to ever cheaper electronics products made by folks in parts of the world where people don’t get paid very much and couple that with the use of cheap electronic components and no effort to do any kind of RF shielding or filtering.

In house renovations, more thought goes into what a light fixture looks like than anything else.

As a licensed amateur radio operator, I was quite concerned about RF pollution.    Living in a large urban area, I didn’t expect the RF pollution situation to be perfect, but I wanted to minimize it as much as possible.

Even radio signals from local 50,000 watt radio stations were completely wiped out by a loud buzzing noise.   So, if these light fixtures wiped out the entire AM radio band what was going to happen to my ham radio equipment?

I went through the lighting system turning stuff on and off so that I could narrow down which lights were causing the problem.   I eventually narrowed it down to a string of lights that were above the kitchen sink.

While I was doing that, a ham radio buddy of mine dropped in and told me “hey, I read something about that in QST”.   We looked it up online and found the problem.    That lead me to this little Youtube video about Eurofase halogen lighting posted by Norm VE3LC that I’m linking to below.

A word of warning, before you view this video you’ll want to have your fingers near your speaker volume controls to turn down the really awful noise generated by these Eurofase lights.

I showed Norm’s video to my kitchen contractor and told him in no uncertain terms that I wanted this Eurofase lighting removed. So they removed it and replaced it with something that appears to be reasonably RF quiet.

To Eurofase, you’re producing crap and I’ll never buy anything with your brand name on it.

Along with the MP3 streams, BBC Radio streams are also available in the AAC format. I’ve found out or figured out the URL’s for some stations (a bit of trial and error involved) and I’ll post these after I’ve made a little more progress.