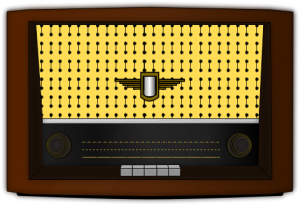 Although many international broadcasters have shifted their transmissions to streaming audio on the net along with satellite delivered radio, the shortwave broadcasting bands are still surprisingly busy!

The nice thing about shortwave radio is that when all is said and done it’s fairly cheap and fairly portable…that is for the listener.

The expense is on the broadcasters side of the equation i.e. huge electricity bills, transmitter and antenna construction and maintenance etc.

With plenty of low-cost shortwave receivers on the market, shortwave radio is still the cheapest method for citizens of many third world countries to receive international news.   And many of the broadcasts directed at the third world can easily be heard here in southern Ontario.

Shortwave radio stations broadcast on a number of segments within the “High Frequency” or “HF” part of the radio spectrum between 2 and 30 Megahertz (MHz.)   These segments are labelled “bands” and the wavelength is given in “meters”.

You may have an inexpensive radio that’s labelled “SW1, SW2, SW3” etc.   This labelling is really quite meaningless.   It’s simply the way that the radio designers have decided to carve up the shortwave radio spectrum.   What’s really important is what shortwave radio broadcasting bands your radio is able to cover.

Some inexpensive shortwave radios will simply cover 4-12 MHz.   On such a radio, it means that you won’t be able to hear certain broadcasts.

The 120, 90 and 60 meter bands are allocating to third world countries for “regional” broadcasts.  Although lately a number of U.S. evangelical stations have setup shop on these bands.  Here in North America, you’ll generally need a fairly good quality shortwave receiver along with a good outdoor antenna to hear stations on the 120 and 90 meter bands.   Stations broadcasting on 60 meters are a bit easier to hear.   Of course you’ll have no problem at all hearing those U.S. evangelical stations!

The 75 meter band is used in Europe, but stations using this band can be heard in North America at night.   As well, in North America this part of the radio spectrum is allocated to amateur (ham) radio.

The 49 meter band is a major international broadcasting band used by many broadcasters.

The 41 meter band is a band that is “shared” to some degree with amateur radio.  In the Americas the segment from 7.1-7.3 is allocated to ham radio, while elsewhere in the world its allocated for broadcasting.   This creates a bit of chaos after dark when both high-powered broadcasting stations and ham radio operators compete for your ears!   If you’re a ham trying to talk to your buddy the broadcasters drive you crazy.   If you’re trying to listen to a broadcast, the ham chatter drives you up the wall!

As a result of some recent ITU (International Telecommunications Union) decisions, the broadcasters will be required to vacate the space from 7.1 to 7.2 MHz. in favour of the ham community.

The 31 meter band is also a major international broadcasting band used by many stations around the world.   All of the bands between 120 and 31 meters tend to propagate best between parts of the world that are in darkness.

The 25 meter band is sort of a “transitional” band.   Depending on where we are in the eleven year solar cycle (in 2006 we’re getting near the bottom of the cycle) signals on the 25 meter band may propagate well either during daylight paths or night time paths, depending on what part of the world the signal is coming from.

The 21, 19, 16, 13 and 11 meter bands will all generally propagate best during hours of daylight.  However during years of high solar activity, the 21 and 19 meter bands will be open to one part of the world or another 24 hours a day.

During periods of low solar activity the 13 meter band may not open at all even during daylight hours.

The 11 meter band is only used by half a dozen or so stations at the very peak of the sunspot cycle.  So, if you happen to have a portable radio that doesn’t tune this band, it’s not a great loss.