I first started listening to “exotic” radio stations from far away as a kid. First, listening to out of town hockey games and Top 40 radio from across the country on the AM radio band at night.

Then later into my teens and twenties I began discovering radio stations from around the world that I could hear on shortwave radio. Over the years I learned to build bigger and better antennas and acquired newer and better quality radios.

Of course there are also video and audio podcasts too!

But mostly, I keep coming back to streaming radio. Video requires you to stare at a computer or TV screen. Audio doesn’t. You can do other things.

Over the last decade and a half, I’ve used all kinds of software for streaming radio; both proprietary software run under Windows and free software after I made the switch to GNU/Linux.

A few years ago, I discovered the “Radio Tray” internet radio software quite by accident. I installed Voyager Linux, a Xubuntu “re-spin” from France on one of my home desktop machines and discovered that “Radio Tray” was part of the default installation.  Radio Tray is pretty much the solo project of Carlos Ribeiro from Portugal.

I started playing with it and quickly fell in love with it’s simplicity, functionality and low usage of computer resources.

Radio Tray is a software programme that comes from the old school thinking of “do one thing only and do it well”.    So, it is not a complete audio management programme like Clementine  that streams radio, aggregates podcasts, manages your music collection, plays and rips your audio CD’s.

Also it frees you from having to open up a web browser to listen to your favourite net radio, except of course if a station only streams using one of those cutesy flashplayer based “in browser” players.

You can run Radio Tray on a fairly old computer.    I’ve run it on fifteen year old Pentium III class computers and it doesn’t even break a sweat!    If you have an old computer gathering dust, you can easily turn it into an internet radio.

Radio Tray only runs on GNU/Linux.  Sorry, but there is no Windows or MacOSX version available.  Mind you, if you have an old Windows XP box you really do need to put an up-to-date,  secure operating system on it anyway.

Radio Tray will handle audio streams in the .PLS, .MP3, .M3U, .OGG, .ASX, .WAX and .WVX formats.   It also handles streams that use the Microsoft Media Streamer (MMS) URL instead of HTTP.

It does not handle .RAM (Real Player) or .QTL (Quick Time) formats, but hardly anyone uses them anymore so it’s no big deal.

On any Debian or Ubuntu based GNU/Linux distribution, you can easily install Radio Tray using your package management software in about a minute.    You’ll find that the authors of each distribution will have already “populated” Radio Tray with a dozen or so internet radio stations in a variety of genres.

taskbar.    You just go through the menus, and click on the station that you’d like to play! 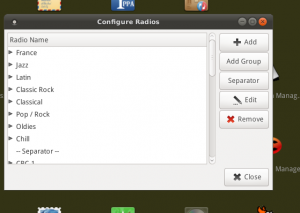 This is the “Configure Radio” screen where you can add folders or “groups”, add and edit stations

This is the screen where you add a new radio station to your Radio Tray bookmarks!

To add folders and new radio stations you just right click on the Radio Tray icon and go into “Configure Radios“.   To add a station, you just copy and paste the URL of the audio stream you want to “bookmark” and then give it a name.

Be careful not to duplicate a radio station name.    I discovered this little problem when I had entered “Toronto” under CBC Radio One and then also tried to enter “Toronto” under my CBC-2 folder.   It didn’t work!   So I just called it “CBC2 Toronto” instead and it worked fine. 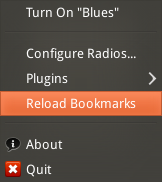 After you’ve added some of your own stuff to Radio Tray, just right click on the Radio Tray icon in your taskbar, and click on “Reload Bookmarks” just to make sure that Radio Tray has accepted your changes.

Of course I’m a little bit crazy and so my Radio Tray setup probably has a couple of hundred radio stations bookmarked!

If you’d like to copy your Radio Tray bookmarks from one computer to another, it’s actually pretty easy.

/home/yourusername/.local/share/radiotray and you’ll find a little file called “bookmarks.xml“.    That’s the file you’ll want to make a copy of and copy to the same location on another computer.

Of course if you copy a new bookmarks.xml file over to another computer, make sure to reload the bookmarks!

So give Radio Tray a try.   You might also grow to like little programmes that do cool things!